In this episode of our volunteer-driven research project “Walking The Way with The Saints”, we focus on Morth Shmuni And Her Seven Sons And Eliazer.

I, Yousif Abdul Wahid, had the most blessed time researching these amazing saints in the past few weeks. I heard a lot about them while growing up from many people from my local church. The first thing that might strike the reader is that their story took place in the Old Testament. The sense of locality that I notice in our relationship with the saints is usually heavily influenced by the fact that the previous generation of our people had a personal and direct relationship with them. As we are Syriacs, most of these saints have been Syriac in ethnicity or possibly Greek. There have been Jewish saints that we celebrate and hold so dearly to our hearts but much less so from the Old Testament. What’s special about Mart Shmuni is that she, along with her sons, always seem very close to my people. One possible reason is that of the many repetitive sightings of their shadows roaming around the walls of the Syriac Orthodox church dedicated to them in Qaraqosh, near Mosul. Their blessed memory is celebrated in the Syrian Orthodox Church on May 8th and August 1st.

Morth Shmuni’s name was never mentioned in the book of Maccabees and so was given the name Shmuni which translates literally to “my name.” I personally believe that the kind of sacrifice she offered to God is very rarely matched by any other saint or martyr in the church.

The story of their martyrdom took place during the ruling of the Greek emperor, king Antiochus IV (175-164 BC). This can be read in the second book of Maccabees chapter 7. Here is an excerpt:

It came to pass also, that seven brethren with their mother were taken, and compelled by the king against the law to taste swine’s flesh, and were tormented with scourges and whips. But one of them that spoke first said thus, what would you ask or learn of us? We are ready to die, rather than to transgress the laws of our fathers. Then the king, being in a rage, commanded pans and cauldrons to be made hot: Which forthwith being heated, he commanded to cut out the tongue of him that spoke first, and to cut off the utmost parts of his body, the rest of his brethren and his mother looking on. Now when he was thus maimed in all his members, he commanded him being yet alive to be brought to the fire, and to be fried in the pan: and as the vapors of the pan was for a good space dispersed, they exhorted one another with the mother to die manfully, saying thus, The Lord God looks upon us, and in truth has comfort in us, as Moses in his song, which witnessed to their faces, declared, saying, And he shall be comforted in his servants.

Just as brave as the first son were all his other brothers. The second one had even been given worse than the first as the king ordered his servants to take off the skin of his head along with the hair. The others did not have it easier whatsoever. As they got to the last son, who was only three years of age, the king took a different approach. Antoichus promised that he would make him both a rich and a happy man, if he would turn from the laws of his fathers; and that also he would take him for his friend, and trust him with affairs. Moreover, the king turned to the boy’s mother and exhorted her with many words to convince her son to obey the king but with unshakable faith laughed the cruel tyrant to scorn and in her own language pleaded her son to hold strong to his faith so that she may receive him along with his brothers in heaven. The young boy in no case hearkened unto the king’s commandments, he said, whom wait you for? I will not obey the king’s commandment: but I will obey the commandment of the law that was given unto our fathers by Moses.

And just like that, they received the crown of martyrdom with unshakable faith and hope in their Lord to be merciful to his people, take heed to their torments, and be just and judge the oppressors according to their unspeakable acts.

I also want to include some of what the great martyrs said before they rested in the bosom of Abraham as the lessons that can be learned are plenty and rich. As we went over what the first son said, let’s move on to the second and move down the list to the mother. I will, then, focus on some key points that I feel are important to note.

The second son said: … you like a fury take us out of this present life, but the King of the world shall raise us up, who have died for his laws, unto everlasting life.

The third son said: These (limbs) I had from heaven; and for his laws I despise them; and from him I hope to receive them again. In so much that the king and they that were with him, marvelled at the young man’s courage, for that he nothing regarded the pains.

The fourth son said: It is good, being put to death by men, to look for hope from God to be raised up again by him: as for you, you shall have no resurrection to life.

The fifth son said: You have power over men, you are corruptible, you do what you will; yet think not that our nation is forsaken of God; But abide a while, and behold his great power, how he will torment you and your seed.

The sixth son said: Be not deceived without cause: for we suffer these things for ourselves, having sinned against our God: therefore marvelous things are done unto us. But think not you, that take in hand to strive against God, that you shall escape unpunished.

The seventh son said: For we suffer because of our sins. And though the living Lord be angry with us a little while for our chastening and correction, yet shall he be at one again with his servants. … that you by torments and plagues may confess, that he alone is God; And that in me and my brethren the wrath of the Almighty, which is justly brought upon our nation, may cease.

Morth Shmuni: I cannot tell how you came into my womb: for I neither gave you breath nor life, neither was it I that formed the members of every one of you; But doubtless the Creator of the world, who formed the generation of man, and found out the beginning of all things, will also of his own mercy give you breath and life again, as you now regard not your own selves for his laws’ sake.

One of the things that one cannot miss to notice is that none of them was slightly shaken by fear of the torments they were about to undergo. Perhaps the mother was the biggest proof of this as she bore it with good courage, because of the hope that she had in the Lord. She exhorted every one of them in her own language, filled with courageous spirits and was certain that she would meet her children up in heaven.

I can’t help but to think of the beautiful words that our Lord spoke in Matthew 10:28: “And do not fear those who kill the body but cannot kill the soul. But rather fear Him who is able to destroy both soul and body in hell.” Not only were they not afraid but they also spoke to the king with authority and warned him of the punishments that he will receive from God Almighty.

The second son’s prophecy that stated that the King of this World has died for his laws, was very shocking for me to read. As we know that this incident took place about a century and a half before the coming of Christ into this life. This fact puzzled the Jews long after the birth of Jesus, even. It puzzled the devil himself. Refer to 2 Peter 1:21.

The sense of unity and tradition is very apparent and strong throughout the whole story. They consistently attributed their refusal of eating pork meat to the teachings of their fathers. They spoke in a communal sense when they said that they deserved what they’re receiving because of their sins. They saw the trials as a way of chastening and correction of their people so that God will reunite with them and lift his anger from them. Refer to Matthew 5:8, 1 Peter 5:5-6. 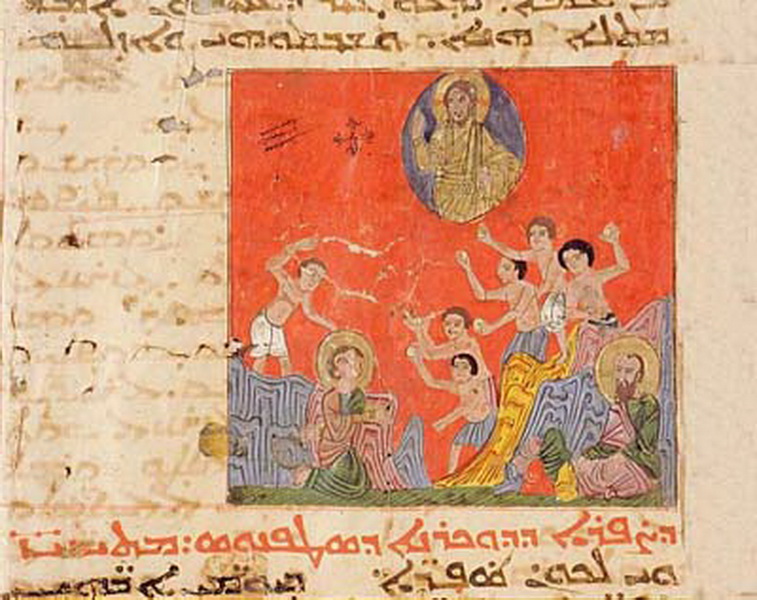 There are definitely many more things to learn and meditate on in the story of these amazing saints. May their prayers be with us all, Amen.

Stay tuned for the next episode as laymen and clergy present their research on the saints of the Syriac Orthodox Church.