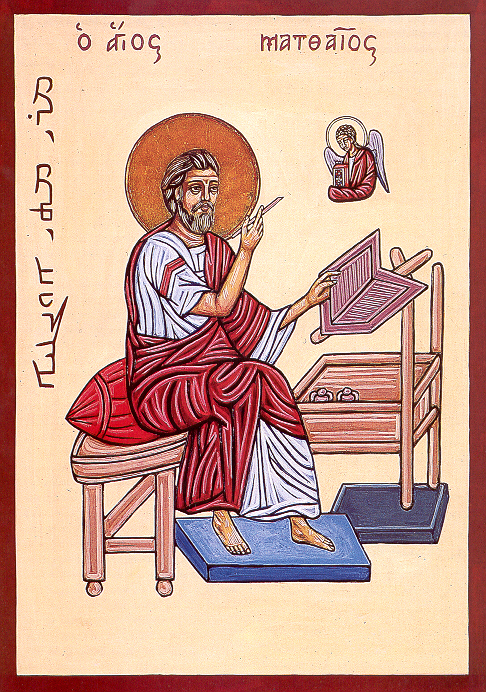 In this episode of “Walking The Way with The Saints,” we focus on St. Matthew The Apostle (1st Century A.D.) one of the 12 apostles and writer of the Gospel of Matthew. We commemorate him on February 24 according to the Syriac Orthodox Liturgical calendar. Deacon Daniel Malyon presents us with his research into the saint’s life and how his enthusiastic love for our Lord made him turn from his faulty ways of being a corrupt and greedy tax collector to giving back to anyone he unjustly took from fourfold and giving half his belongings.

Saint Matthew the Apostle is one of the Gospel writers, the key inspired texts in our understanding of the life and teachings of our Lord Jesus Christ. Though his specific influence and early life are aspects that are known about, the depth and importance of his life, style, and influence are often not engaged in sufficiently to appreciate the wonderful example he sets for us.

From both the Gospels and the wider Church tradition, we know some details about the early life of St. Matthew. He went by the name Levi and was a tax collector. We are told in the 9th chapter of Matthew’s own Gospel, verse 9, that, “As Jesus went on from there, he saw a man named Matthew sitting at the tax collector’s booth. ‘Follow me’, he told him, and Matthew got up and followed him.” At the time tax collectors were seen as social outcasts due to their association with the Roman occupation forces and habit of taking a vast amount more from people than required in order to make themselves rich. When he is called by Christ it caused a stir amongst the Jewish community who saw it as against ritual purity to associate with tax collectors, and therefore saw Christ’s sharing of a meal with Levi to be against ritual purity laws, to which Christ reminded them that his mission was to the sinners and ritually outcast as much as to anyone else.

St. Matthew went on to become one of Jesus’ greatest apostles, giving back fourfold what he (unjustly) took as a tax collector and giving up his belongings, as Christ taught. Following the ascension of Christ, he travelled far and wide, preaching in Palestine and Tyre and Sidon and Ethiopia.

Whilst he was in Ethiopia, he consecrated a Bishop for a city, and the people there were convinced through his teachings to turn from their idol worship and embrace Christ and his Gospel. Upon hearing this the governor was furious and ordered them burnt, however after witnessing the Lord protecting his people and their enduring faith, he himself was brought to faith in Christ. Following this he continued to go on missionary journeys and was later martyred in either Ethiopia or Hierapolis.

Outside of his life being a great example of the metanoia (change due to penitence) from selfishness and arrogance to a life of humility and service, his obvious contribution is the Gospel of St Matthew, one of the four canonical Gospels we have which detail the life and teachings of Christ during his earthly ministry. St Matthew’s Gospel is especially interesting since it is written for the specific audience of the Jewish community and includes details and specific references designed to allow for the Jewish community to recognize the place of Christ as the Messiah, showing them His fulfilment of the prophecies and requirements found in the Hebrew scriptures.

Examples such as beginning his Gospel with the genealogy of Christ to show his connection to the house of David demonstrate his emphasis in demonstrating how Christ is the fulfilment of scripture. Also, his use of discussions of Christ’s actions with reference to Jewish law demonstrate a vast understanding of both he Jewish tradition of the time as well as the relationship between this tradition and Christ’s earthly ministry show St Matthew’s mission to the Jews. This makes his Gospel a vital discussion of Christ in both his time and for understanding the Salvation it brought. Through both his life and writings, St Matthew is an example for us on how to life our faith and share it. May his intercessions be with us all.

May the prayers and blessing of St. Matthew the Apostle and Evangelist be with us all and glory be to God forever, Amen!