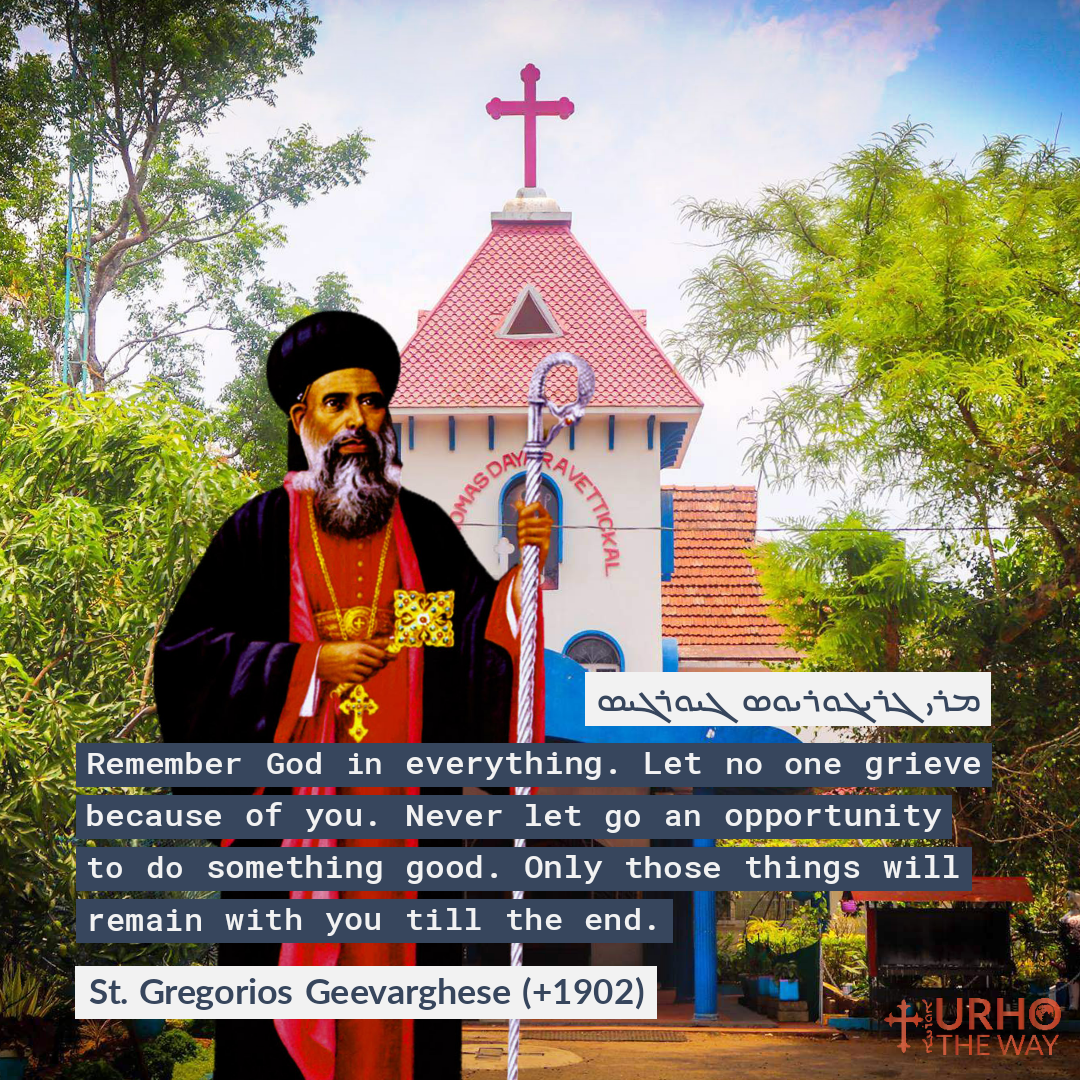 In this episode of “Walking The Way with The Saints”, we focus on Mor Gregorios Geevarghese (Parumala Thirumeni), whom we commemorate on November 2 according to the Syriac Orthodox Liturgical calendar. Annie Varghese presents us with her research into the life and impact of this beloved saint of Malankara and how he can inspire us to lead a life of prayer, fasting and passion for the work of God in this world today.

St. Gregorius Geevarghese Chathuruthil also fondly remembered as Parumala Thirumeni was born on 15 June 1848. His parents were Chathuruthil Mathew and Kallarackal Mary. He was the youngest in his family and had four siblings (Kurian, Varkey, Mary and Eli). Parumala Thirumeni started his preliminary education under the guidance of Onakkavil Ayya. After completing his primary education he studied theology and Syriac from his paternal uncle Rev. Geevarghese. Thirumeni led a prayerful and pious life from a very young age. At the age of 10, in the year 1858, he
was ordained a subdeacon by His Grace Palakkunnath Mathews Athanasius.

A Vision of St. Mary

When Thirumeni was still a deacon and a student of Rev. Geevarghese. The Rev. priest became seriously ill with smallpox. Deacon Geevarghese took care of the priest. Rev Geevarghese died on the eighth day and the deacon became ill. It was during this time Thirumeni had a vision of St. Mary in his dream. Mother Mary consoled him and asked him to dedicate the rest of his life to the Lord. Thirumeni pledged to his heavenly mother and continued leading a life of prayer.

In the year 1865 Kochu Thirumeni was ordained as a priest and subsequently as a Corepiscopo by His Grace Mor Koorilos Yuyakim. In the year 1872 Pulikkotil Joseph Mar Dionysios raised him to the order of Ramban. On December 10, 1876 the young Geevarghese Ramban was ordained as Mar Gregorius Metropolitan by H.H. Moran Mor Ignatius Patriach III. Since Thirumeni became a Metropolitan at the age of 29 he was fondly called “Kochu Thirumeni” (youngest bishop).

Thirumeni became the bishop of Niranam, Kerala India. He then took charge of the dioceses of Thumpamon and Kollam. He stayed at Parumala and later came to be known as “Parumala Kochu Thirumeni”.

Life of Prayer and Fasting

Thirumeni followed a life of discipline, fasting, prayer and meditation. He woke up at 4 AM every morning and spend the entire day praying and teaching deacons. On Wednesdays, Fridays and Lenten days, he would fast till evening. Thirumeni once said, “He who prays to God everyday would never be without truth, morality, faith and devotion, and would never turn against his master or society”. Another of Thirumeni’s quote says, “When we pray with a heart full of devotion, God accepts it and we receive blessings in return”.

Champion of the Poor

Mathew 25:40 says “The King will reply, ‘I tell you the truth, whatever you did for one of the least of these brothers of mine, you did for me.’ Thirumeni made sure that the poor who reached the gates of the church were fed. He lived a life to serve the poor and hungry.

When Parumala Thirumeni was in charge of Thumpamon diocese, Kerala, the small pox disease spread in the region. Thirumeni went to every house in the region and prayed for the people who were sick irrespective of their caste, creed or religion. Many were cured of the disease. The bible verse Mathew 5:15-16 says, “Neither do people light a lamp and put it under a bowl. Instead they put it on its stand, and it gives light to everyone in the house. In the same way, let your light shine before men, that they
may see your good deeds and praise your Father in Heaven”. Thirumeni was a light to humanity and gloried the name of his Heavenly Father with his actions and deeds.

Parumala Thirumeni founded a few schools in Kerala, India to facilitate the education of young children.

Death of the Saint

His Grace remains a beacon to the church and its believers. He was called to eternal rest on 2 November 1902.

Miracles after the death of Thirumeni

It is said that once during a church robbery in the United States (Chicago) thieves destroyed icons of saints at the church. However, the picture of Thirumeni was untouched and turned towards the wall. A few days after the incident the police caught the thieves and asked the thieves about why the picture of Parumala Thirumeni was untouched. To which they said rays of light came from the picture and the thieves did not have the courage to destroy the picture. Many people have received healing and a number of miracles are attributed to Thirumeni’s intercession
every year.

May the prayers of Parumala Thirumeni be with us all, and glory be to God forever. Amen!

// 𝑹𝒆𝒗𝒆𝒓𝒃𝒆𝒓𝒂𝒕𝒊𝒐𝒏𝒔 𝒐𝒇 𝑪𝒉𝒐𝒊𝒄𝒆 //
🎄🌟 Merry Christmas to all our brothers and sisters (on both Gregorian and Julian calendars)! This video is a small attempt to highlight a few Nativity hymns celebrating the birth of our Lord Jesus Christ from the different Oriental Orthodox traditions (Armenian, Ethiopian, Eritrean, Coptic, Syriac). May we all truly celebrate as one family! 🙏
Wishing all of you a blessed Feast of the Nativity of our Lord and Savior Jesus Christ, for our brothers and sisters who are celebrating today. 🎁🎄🌟🎅🙏